Jay Singh-Sohal has been selected the Conservative candidate for the role of West Midlands Police and Crime Commissioner.

Jay, who works as a Strategic Communications director at M&C Saatchi, grew up in Handsworth (inner-city Birmingham )and lives with his family in Royal Sutton Coldfield.

The 36 year old is an ITV-Central trained television journalist who has also worked at Sky News as well as an independent filmmaker. He has ten years experience in the military including on  operations and continues to serve as a Captain in the Army Reserve.

Jay was educated at Handsworth Grammar School before going on to Brunel University, SUNY Brockport in New York and City University.

During his career he has also worked at: Her Majesty's Inspectorate of Prisons, The Heritage Foundation in Washington D.C, BBC at the Mailbox in Birmingham and in Coventry, and the City of Westminster. He has also volunteered and organised community projects in the West Midlands, including the award-winning WW1 Sikh Memorial at the National Memorial Arboretum.

His hobbies include military history, travelling to historic sites, football and filmmaking. 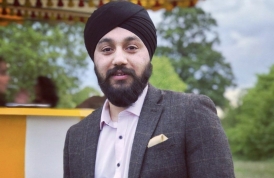